Call for justice, guidelines for kings, wars and prophets: Deuteronomy 16:18–20:19

Is this the first record of a king being under the law as much as any ordinary person?

The first task for a newly appointed king would be to copy out the law by hand, and then read that copy every day.

Deuteronomy 17:18–19 “When he sits on the throne as king, he must copy for himself this body of instruction on a scroll in the presence of the Levitical priests. He must always keep that copy with him and read it daily as long as he lives. That way he will learn to fear the Lord his God by obeying all the terms of these instructions and decrees.

Not only would it keep the king in fear of God, but also it would keep him at the same level as his people.

Deuteronomy 17:20 This regular reading will prevent him from becoming proud and acting as if he is above his fellow citizens. It will also prevent him from turning away from these commands in the smallest way.

And in an echo of God’s blessings lasting a thousand generations for the obedient, doing this would ensure that the king and his descendents would retain the leadership of the country.

You have to ask: which kings went through this process? We could guess that Joash did at the start of his reign, since he was raised in the Temple. But he might not have kept up the discipline of reading the law every day as he later fell away. Josiah would not have been able to read the law when he was first crowned, but once the priests found the scrolls, he was convicted enough about the contents to probably have read it daily.

The so-called evil kings probably didn’t write the law out, or even if they did, they wouldn’t have read it daily, and if they did that, they didn’t take it seriously. You can work this out from their actions: rejecting the words of prophets, killing prophets, stealing land, taking too many wives and accumulating horses, worshipping other gods (and idols), and the list goes on.

So what if our rulers did the same?

Can you imagine what would happen if the rulers today were required to write out the laws by hand and then read them every day? For a start, there would be major legislative reform to reduce the volume of law.

For example, Australian tax legislation has been criticised for being too long, and so complex that no one, not even professionals, can understand it any more (Source): 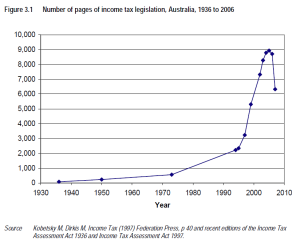 And we might avoid corruption scandals and some of the more unjust laws that are passed with increasing frequency.

So, while critics lash out at the God’s Law for being too old-fashioned and simplistic, at least it is short, understandable, and easy to apply if you use common sense. Its goals are clear: not to deliver a legalistic community that pays lip service to a set of rules, but to help a people in a new nation live righteously and avoid evil. As a side-benefit, people in the other nations would think Israel was wise, and the king was to lead the way.