Elam was a small nation in eastern Iran and far-south Iraq: 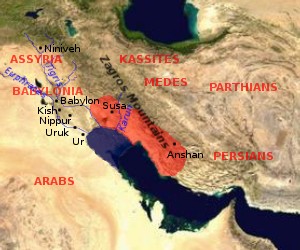 Jeremiah saw a future for Elam that was, in the shorter term, not so good. But in the long run, God has plans for good for the people:

Jeremiah 49:35-39‘I will destroy the archers of Elam—
the best of their forces.
I will bring enemies from all directions,
and I will scatter the people of Elam to the four winds.
They will be exiled to countries around the world.
I myself will go with Elam’s enemies to shatter it.
In my fierce anger, I will bring great disaster
upon the people of Elam,’ says the Lord.
‘Their enemies will chase them with the sword
until I have destroyed them completely.
I will set my throne in Elam,’ says the Lord,
‘and I will destroy its king and officials.
‘But I will restore the fortunes of Elam
in days to come.
I, the Lord, have spoken!’

Ezekial, who was a contemporary of Jeremiah, saw only a grim future for Elam (along with Egypt, Assyria, Meshech and Tubal, Edom, all the princes of the north and the Sidonians):

32:24 Elam lies there surrounded by the graves of all its hordes, those who were slaughtered by the sword. They struck terror in the hearts of people everywhere, but now they have descended as outcasts to the world below. Now they lie in the pit and share the shame of those who have gone before them.

So how much of this has happened?

There is no longer a nation of Elam.

There still was an Elam in Ezra’s time, when men from Elam (and others) lobbied Xerxes to stop Jerusalem being rebuilt:

Ezra 4:9-10 They greeted the king for all their colleagues—the judges and local leaders, the people of Tarpel, the Persians, the Babylonians, and the people of Erech and Susa (that is, Elam). They also sent greetings from the rest of the people whom the great and noble Ashurbanipal] had deported and relocated in Samaria and throughout the neighboring lands of the province west of the Euphrates River.

Even this suggests that some of these people, possibly including Elam, had been scattered across Samaria and nearby lands. The destruction seen by Jeremiah and Ezekiel eventually came, probably at the hands of the Assyrians, the Babylonians, the Medes and the Persians, and probably others.

Written Elamite probably disappeared with the nation itself in around 500–300BC (only rulers, priests and scribes left written records at the time). Even so,  the Elamite language was still spoken on the day of Pentecost:

But there’s no record of Elamite now: Elamite is considered to be extinct, with no obvious links to any modern language.

This all leaves one, unfulfilled verse from Jeremiah’s prophecy:

Jeremiah 49:39 But I will restore the fortunes of Elam
in days to come. I, the Lord, have spoken!

Some people think Iran is modern-day Elam, but that’s only supposition. We don’t know either way. We won’t know until either Elam is restored as prophesied, or Iran/Persia fulfils the entire prophecy written for Elam.